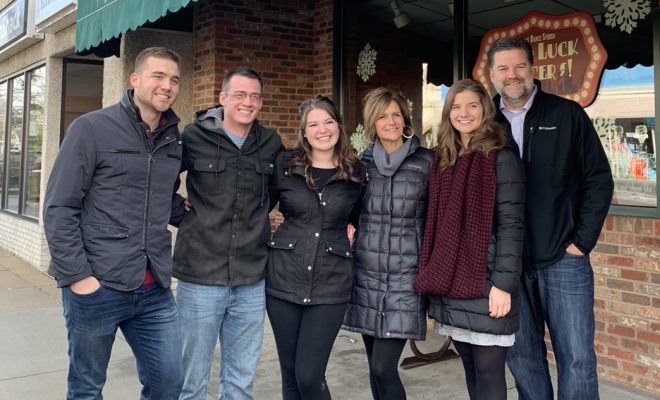 Above: The Gustke and Burton families pose in front of the dance studio at 1009 E Main St. Dorinda and Boyd Gustke sold the business to Brooke and Jordan Burton in November. Pictured left to right are Cole Gustke, Jordan Burton, Brooke Burton, Dorinda Gustke, Ally Gustke, and Boyd Gustke.

In 1981, not yet old enough to drive, Dorinda Gustke started her own business with a boom box and a dream. Using whatever space she could find around her hometown of Merrill, Dorinda held classes teaching other kids to dance.

Thirty-seven years and thousands of students later, Dorinda is entrusting the business she built from scratch to Brooke Burton, another young lady with a passion for dance and a deep commitment to the studio.

In a message to dance families announcing the sale, Dorinda thanked them for all their support.

“Over the years, it became evident – just like in class – there was always a tremendous following of support to help ensure that personal goals were met,” she stated. “In this case, thousands of dedicated students, their supportive families, and numerous communities were always there. They saw the passion within the dancers, they experienced the euphoric feeling of the applause, they sensed self-accomplishment; in response, they supported what the studio stood for.”

As she steps aside, Dorinda is confident that the studio is in good hands with Brooke.

“As a former student, teacher and now dance professional, she understands what means the most to students and their families, the required elements of the business, and the commitment necessary to ensure that our ownership transition is both natural and comfortable for all involved,” Dorinda said.

“It’s a lot of work and it takes a lot of energy,” Dorinda later added. “Brooke is the perfect person. All the stars were aligned and somebody was watching over us.”

In her message to families, Brooke vowed to build upon the studio’s foundation of helping students realize their potential.

“These goals have been the foundation of Dorinda’s Dance Studio since day one and will remain our priority as we move forward into the future,” Brooke stated. “We plan to run the studio ‘business as usual,’ not skipping a beat. The exceptional staff will remain; the classes, policies and procedures will remain; and most importantly, the culture Dorinda has created here centered on quality dance instruction with an emphasis on helping children grow and make lifelong friendships and memories will undoubtedly remain.”

Brooke said she had no hesitations about taking on ownership of the studio.

“I feel so compelled to do it,” she said. “Every step in my life has led me here. Dorinda was my biggest role model growing up.”

Brooke grew up in Tomahawk. Her parents, Toni and Jeff Renn, enrolled her in one class at Dorinda’s Dance Studio when she was two years old. They soon found themselves driving their daughter to Merrill multiple times per week as she discovered her passion for dance. Over the years, Toni and Jeff also became part of the studio’s “dance family.”

By nine years old, Brooke was helping Dorinda in the studio and later became an instructor. The studio became a social center for Brooke, providing some of the pivotal moments in her life. Through a friend she had made at the studio, Brooke was introduced to a boy from Merrill, her now-husband Jordan Burton.

After high school, Brooke went off to college, but maintained her connection to the studio, coming back to help Dorinda with the annual dance shows.

Upon graduating college with degrees in Business and Psychology, Brooke moved to Merrill where Jordan continues to help operate his family’s cranberry farm.

Brooke was quick to resume her involvement with the dance studio and has been teaching there for the past two years.

Both Dorinda and Brooke noted a seamless transition in ownership.

“The hardest part of the transition was switching over the iTunes account,” Brooke joked.

With the stress of running a business now lifted, Dorinda remains a part of the studio in a consulting role – whether that means teaching classes or taking out the garbage.

“I’m going to be a good employee,” she said.

Looking back, Dorinda remembers the early years of teaching classes in the Knights of Columbus building, the old depot, the American Legion building and church basements. The response to her first dance recital was encouraging, if a bit overwhelming, sending her scrambling to find enough chairs for the audience.

“We had our first show at Pine River School,” Dorinda said. “I had 25 students and almost 300 people showed up.”

That would turn out to be just a hint of things to come. The students, audiences and the complexity of the annual productions have since increased exponentially. The studio now does a run of five very well-attended shows every year in the Prairie River Middle School auditorium.

Dorinda was 10 years into her business when she bought the building at 1009 E. Main St. as a permanent home for her studio. Along the way, Dorinda met her supportive husband, Boyd Gustke, and they raised two children, Cole and Ally. 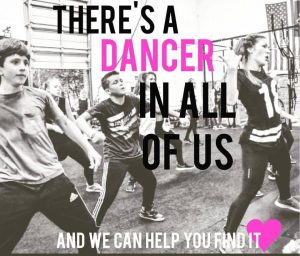 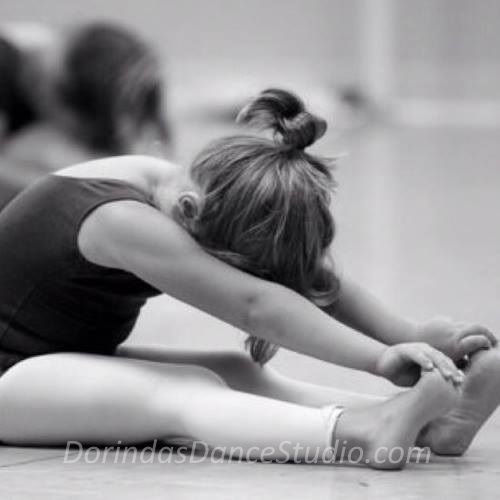 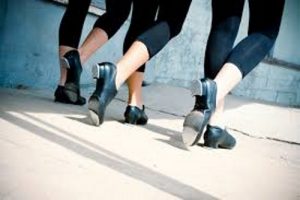